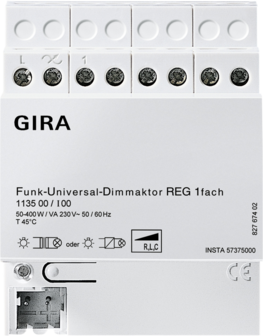 The wireless universal dimming actuator receives wireless telegrams for switching and dimming various electrical loads from the wireless reception module via a separate data line. The universal dimmer automatically detects the connected load (inductive, ohmic or capacitive) after initial installation and after being disconnected from the mains and sets the most suitable dimming method according to the leading or trailing edge principle.