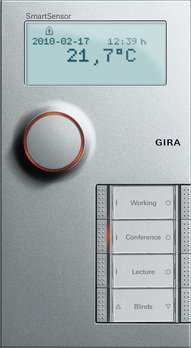 The Gira SmartSensor is a control and operating unit for the Gira KNX system on which all KNX functions can be conveniently controlled and regulated. It combines the functionality of a heating regulator and a touch sensor with the clarity of an info display. Although the SmartSensor is a jack of all trades, it is easy and convenient to operate, using an LC display and operating knob which can be turned and pressed.

Frequently used functions can also be called up directly using the four rockers on the device. The Gira SmartSensor is particularly suitable for conference rooms and open-plan offices due to its great functional depth. It can also be used in the home, allowing rooms to be merged into compact functional islands.

The handy operating knob makes operating the Gira SmartSensor particularly convenient. When it is pressed, the SmartSensor display is automatically put into an active state. By rotating the operating knob, the user moves intuitively through the menu. Pressing the knob confirms the selection of a menu item or action. The menu navigation is clearly structured and features two operating levels. To prevent unauthorised changes, password prompts can be set up for the individual menu items. The operating knob is backlit in orange to facilitate orientation in the dark. It can have a master function, e.g. 'Light on', assigned to it for Standby mode. Standby mode is used to switch off the display when it is not in use. In addition to the LC display and the operating knob, the Gira SmartSensor has four rockers for directly controlling the most important scenes or functions in the room.

The display is fully enabled for graphics and features white LED backlighting. In normal mode, it displays the date, time and the current room temperature. As an option, greeting texts or company logos can also be entered. In addition, the display can show text messages that are transferred via the bus line, e.g. in-house messages in text message form from the KNX system. Alarm messages are also processed in the SmartSensor and archived in a memory. As long as an alarm is active, it is indicated with an alarm symbol in the display. Three types of message tones can be configured to differentiate incoming text and alarm messages by sound, so that occupants know whether a fast reaction is necessary in a dangerous situation.

The Gira SmartSensor is a true all-rounder. It can be used to dim or switch lights on/off, for example, control blinds, or regulate heating. In addition, the Gira SmartSensor not only enables light scenes and scenarios to be called up, but also allows them to be created and changed directly on the device. A maximum of twelve outputs can be controlled, and up to eight dynamic scenarios from the various functions can be stored. Room functions can also be logically linked – in conjunction with special window contacts, for example, the heating can be lowered when windows are opened. The result: Living comfort is maintained and energy costs fall.

The display can be switched between two languages for use in businesses with international user groups, e.g. in large hotels. When necessary, it can be quickly switched over from the local language to a predefined foreign language, e.g. from English to German.

Always up-to-date thanks to software updates

The Gira SmartSensor is programmed via the ETS software, and its functionality can be expanded with software updates. A flash memory allows updates to be integrated into the system at any time and without any additional effort. This option offers building owners and investors maximum investment protection in order to be able to respond rapidly to possible changes.

Thanks to its diverse range of functions, the SmartSensor fits in brilliantly anywhere, when it comes to controlling intelligent building technology conveniently and easily. Setting up password protection is also possible. This makes the SmartSensor ideal for companies, public facilities and offices, hotels, functional islands in the home (e.g. living, eating, cooking), as well as for open living areas (e.g. lofts).

Nomination for the Design Award of the Federal Republic of Germany, 2006

Nomination for the Design Award of the Federal Republic of Germany, 2007