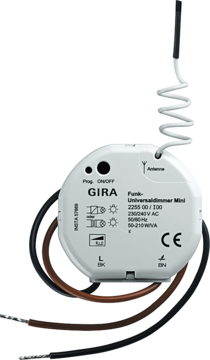 The wireless universal dimmer Mini is installed in the flush-mounted device box behind a switch and enables the switching and dimming of various electrical loads. The universal dimmer automatically detects the connected load after initial installation and after being disconnected from the mains and sets the most suitable dimming method according to the leading or trailing edge principle.

For mixed loads with wound transformers, do not exceed a 50% ohmic load (light bulbs, HV halogen).